by gm in Education

This by no means is a scientific survey but it does follow expectations. There have been very few assessments of science literacy in India, but a notable one in 2004 found that India lagged behind the US in almost all basic scientific questions asked. The survey also found that 65% of the respondents get their science-related information from television and only ~10% read about it in newspaper/books/magazines (Internet was not ubiquitously available back in 2004). This trend is different from that in the US – where people get their science dose from magazines and books. Not surprisingly, most people prefer entertainment, sports, politics and news while only 2% of the people preferred/actively sought out science-related information. Very few people know about existence of science fairs, scientific research institutes, planetariums etc. in their communities.

Sadly, the study points out that at middle-school level, just 22% of the students preferred going into science-related fields. This proportion dropped down to 13% at 11th and 12th standard. This drop corresponds to an equivalent increase in students wanting to pursue commerce and arts. The 11th and 12th standard students say that the primary reason for them not pursuing science is that “they are just not interested”. When asked why they were not interested, they said it was because “they didnt feel motivated enough” or “they didn’t understand the matter being taught”

Not surprisingly, in an international test of assessment of school children’s reading, math and science skills, India ranked 73rd out of 74 countries (74th was Kyrgyzstan). On an average, 8th standard students in India (TN and HP participated, but results can be generalized I think) were comparable to 3rd standard students in Korea in terms of their math skills. Even the best of our students (top 5% of all tested students) were 100 points behind an average child in Singapore and 250 points behind the best of all students tested. On an average, 40 points correspond to one grade (one standard of school years). This means our best students are almost eight standards behind the best students in the world!!! (More about PISA here: Arvind’s World)

All of these indicators suggest that we need to go a long, long way to increase scientific awareness in India. Most people are not interested in science. If this is the attitude, our country can have little innovation.

However, there is a glimmer of hope. Almost 80% of Indians feel that science is really important, it is critical for human progress and that we need to invest more in science. More educated a person, the more likely is he to say that science is important. We need to take advantage of this fact and make sure that our young citizens are being inculcated with scientific values and principles right from their early school years!

Education for the masses

by gm in Education, Opinion

According the 2011 Census, India’s population is 1.2 billion – one sixth of the world’s humanity. By 2050, India’s population will be 1.6 billion, surpassing that of China. Keeping these 1.6 billion people happy is a monumental challenge. If the unemployment rate in 2050 remains the same as today – at 10% – there will be 160 million unemployed people in India. That is more than the current population of Russia! To satisfy this ocean of humanity, India will have to not only create jobs in current sectors of the economy but also create new sectors, allow for development and propagation of new ideas and create social change that trickles down to the bottom of the pyramid. Now, people can throw in all sort of indices, talk about the rising GDP of India and increasing market capitalization to suggest that India is progressing. But all of this is unsustainable if the society becomes chaotic. The big question before the country is – how do we maintain peace and stability in the country 50 years from now? 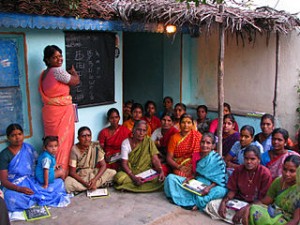 The most fundamental solution to this conundrum is education for the masses. Successive governments in India have recognized this problem and that is why we have a National Literacy Mission and Sarvya Shiksha Abhiyan in place since 1988 and 2001 respectively. The Sarvya Shiksha Abhiyan is targeted towards primary education (6-14 age group) and intends to get the ~200 million children in India to go to some sort of a school. The aim of the NLM program is to impart functional literacy to all non-literate persons in 15-35 age group, where “functional literacy” is a key word. Functional literacy means being able to read, write and calculate and being aware of the civic society around. With this definition and through these initiatives, functional literacy in India has reached up to 74% – 65% for females and 82% for males – from 12% in 1947. NLM claims that 120 million people have been made literate since the program started. Innovative concepts like Ekal Vidyalayhave also contributed to children going to schools, especially in rural parts of India.

However, the question is, are these efforts sufficient? Despite spectacular progresses, India still has the largest population of illiterates in the world. Estimates suggest that the rate of growth of literacy is sluggish and that if the same rate continues, India will take another half a century to be fully functionally literate. Again, remember that all these statistics talk only about functional literacy. In a survey of 16,000 villages, an NGO found that 60% of the school going children were unable to perform simple division. The dropout rates even in primary school are high – around 20%. were Despite obtaining school-level education, studies indicate that more than 80% of the children do not go on to attend college. Of those that attend college, over 70% are unemployable. It is no surprise that Indian students perform poorly in nearly all international indicators of education quality.

In a few decades, the competition for resources in India will start getting more acute. There will arise individuals who will begin to take advantage of peoples’ pains and use them for electoral/monetary gains. Not that such individuals dont exist now, but the conflict will only grow in the coming decades. What we’d need is enlightened leaders – not just one or two but in hundreds of thousands. We’ll need leaders with vision and zeal. Creating such leaders is rarely possible without good education. So while the goals of the Sarvya Shiksha Abhiyan and NLM are noble and should be continued, it is absolutely important to create systems where the leaders of tomorrow will thrive and grow. We need an education system that not only educates the masses but also elevates the masses.