Baby bottles and bisphenol A, pesticides and obesity – A ‘new’ matter of concern?

by Ashwini in Environment 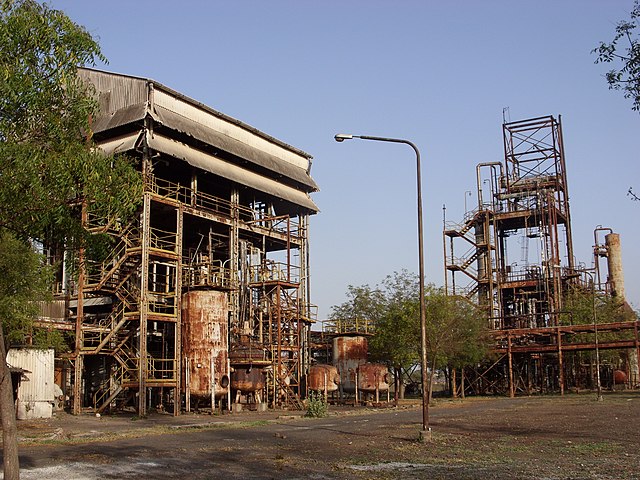 The rusty Union Carbide plant in Bhopal which was the site of a massive toxic gas leak (Source: Wikimedia Commons)

I start this post with a question – Are toxicants present in the environment a cause of concern for us today? It is definitely not making headlines in the nation’s leading newspapers nor is it causing a drastic effect to cause death.  So, do we even care? Well, as Paracelsus, a German-Swiss physician and alchemist had quoted- “All substances are poisonous. There is none that is not a poison and it is the dose that differentiates a poison from a remedy”.  This means that toxicants are pervasive and there is no way we can escape them but these days the chance that we get exposed to them has increased tremendously.  Here is how: We complain about pollution in cities and drive an air-conditioned vehicle to work to avoid breathing the carbon monoxide and diesel particulates. These are air pollutants whose amounts have escalated given the industrialization in our cities and towns. We drink bottled water fearing lead and other heavy metals that could potentially be present in our water and furthermore forget to recycle that plastic bottle.  With the lure of ‘instant meals’ we microwave in plastic containers ignoring the effects some of the toxicants in the plastic can have on us. Furthermore, we disregard the fact that all these daily activities have contributed towards not only polluting the air we breathe, water we drink, land we use but also affecting the human body which we have learned to care less about. The effect of environmental toxicants is only evident when hundreds of thousands of people get exposed to methyl isocyanate gas and other toxicants in a blast caused at the Union Carbide plant in Bhopal. Twenty nine years have passed since this event occurred but the areas surrounding the Union Carbide plant are still deemed to be highly toxic and families live in threat of developing growth related disorders. Little has been done ever since this event occurred to increase awareness among the general public about the health effects of environmental toxicants.

Our fast-paced lives have made us a victim of environmental diseases. In fact, scientists are garnering evidence to show that dietary, pharmaceutical and industrial compounds may alter metabolic processes and in turn lead to cardiovascular disease and obesity.  Recent research suggests that direct long-term health effects are caused from exposure to various environmental toxicants. Bisphenol A- a toxicant present in most plastics has recently caught attention of US-Environmental protection agency as it is shown to disrupt the endocrine system. The effects are not only be seen in the current generation that is exposed to the toxicant but ‘trans-generational’ effects permeable to the next  several generations  have been noted in laboratory animal models. Pthalates which are used as plasticizers are found in plastic toys and even the enteric coating of pills and these have been shown to cause birth defects in animals and are being phased out of many products in the west.   The recent Deepwater horizon oil spill caused by BP in the Gulf of Mexico has created extensive damage and affected tons of wildlife and contaminated ground water. Of particular relevance to India are concerns about the widespread use of the pesticide Endosulfan in the state of Kerala. Groundwater contamination with a heavy metal Arsenic in West Bengal has led to increasing amounts of Arsenic in rice which is a staple for a majority of the population living in that area. Heavy metals such as Lead, benzo[a]pyrene and fine particulate matter such as that in cigarette smoke can cause lung inflammation and chronic illnesses. Dioxins too are pervasive in the environment owing to effluents from industries and laxed environmental regulation about proper disposal of waste. Industrial chemicals such as perfluoroctanoic acid, a surfactant used in production of non-stick cookware is a potential endocrine disruptor and risk factor for human health. The list of hazardous environmental toxicants is endless and the effects are less explored. It is in our ‘health’ interest to be aware of these environmental pollutants and take requisite efforts to decrease occupational and general exposure. Education and awareness about the toxic nature of some of these contaminants has to be brought to the attention of the common man, the industrial workers and even the policy makers! This will require co-operation on several fronts. Scientists will need to communicate research in a non-scientific language to policy makers (who may be power-hungry politicians), NGOs and private industries (with environment-thrust) in India. This idea may appear far-fetched but if started today may well be  a small stepping stone towards a larger benefit.

So, through the next series of posts I will be exploring several major environmental toxicants in detail.  Being in a field of environmental toxicology, I plan to emphasize on the toxic effects and the potential health effects through a scientific perspective. There is a lot of exaggeration and simultaneously a grave concern about several toxicants whose effects have still not been explored in-depth.  It is important that we are aware of the research that is being conducted and be critical about accepting what media has to say about environmental toxicants and pollutants.