by Ashwini in Environment, Opinion

They say that change always involves a pivotal event that can drastically change the course of things in a new direction. Change is often necessary be it in the way we think or in major things e.g. the way we deal with things of national importance. Revolutions in science and technology often change the course of human life and one such change deemed to happen is in global public health. We are currently on the verge of experiencing a third wave of revolution in science. 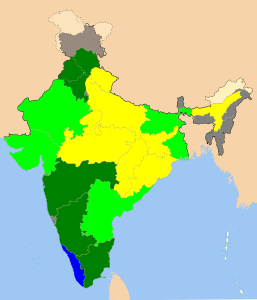 Life expectancy in many parts of India is still less than 60 years (yellow). These regions are some of the most densely populated regions of the country.

The first happened about two decades ago when scientists began understanding that DNA was the basis of genetic transmission and the first animal Dolly was cloned. The second revolution happened around the early 1990s when scientists started understanding the molecular and cellular basis of genetic events. According to the latest report by UNFPA, the human population on this planet is 7 billion and this huge population certainly poses numerous challenges and at the same time several opportunities to tackle the problems at hand. India is currently the second most populated country in the world and by 2015, the population is predicted to rise making India one of the most populated countries in the world. If we fast forward and extrapolate to 2020, India will still remain one of the most populated countries in the world, though world population would seem to plateau at that time. These numbers for population of India are not unexpected. China has taken drastic measures to control their population by implementing several policies where India has obviously failed. But these increasing population numbers mean huge impacts on public health and since Indians will constitute about 17% of the world population they will have a significant impact on global public health too.

The need for better public health cannot be overstated here. What we fail to understand is the health of a nation is pivotal to its economic growth. Currently, the population of US is increasing steadily but this increase is due to migration of the youth and due to the high standard of living and good public health practices and strict environmental regulation, issues of public health are seemingly less of a concern as compared to a country of 1.2 billion people like India.

Another issue particularly relevant to India is of environmental injustice which arises as an offshoot of having huge populations reside in a small square kilometer areas surrounding major cities. Most people residing in such areas belong to low-income households who can barely afford 2 meals a day let alone feel or even bother about environmental pollution surrounding them. Good health facilities are available mostly to the higher income households who can afford to eat and live better.

How can find a solution to these issues? In my opinion, what we really need is an institute analogous to the US Environmental Protection Agency (EPA)  and the Center for Disease Control (CDC) that monitors on-going environmental degradation, puts legislation on emissions, hazardous waste emitting industries, and designs ways to controls epidemics arising in the affected areas. Large scale programs such as National health and nutrition examination survey (NHANES) assess health and nutritional status of people in the United States. These models or systems may not exactly be applicable to India. The job at hand is large. But we can atleast build models similar to those in developed countries   Several agencies such as Center for Science and Environment (CSE-India) and other NGOs are trying to alleviate the problem at hand by generating awareness among the masses. But this just seems like a drop of in the vast ocean of environmental degradation. We need to develop a long range vision for toxicity testing along with public health measures which could involve:

These methods are not guaranteed ways of achieving success over the perils of environmental degradation and public health problems affecting India today but hopefully a few steps in the right direction can make a lasting impact.

If you are interested please see the link below that points towards a series of articles published in the medical journal -The Lancet, focusing on the state of Indian public health.

Indian health: the path from crisis to progress